Barnet Council was one of the councils that led the development of LG Inform and has now started to use it to support benchmarking, promote transparency and to inform strategic decision making around their programme of budget savings and income generation. Using LG Inform, residents and councillors now have access to information which illustrates the high performance of the council as well as showing areas where improvements could be made. As part of the council’s priorities and spending review, LG Inform was used as a benchmarking tool to review performance and costs. The tool was also used to provide evidence to ensure that the correct areas of the council were identified when planning a programme of savings and income generation.

This was two-fold. Barnet was keen to promote transparency and provide direct access to independent performance information both to the public and members. They wanted to provide a clear and balanced image of council performance in relation to peer authorities, which showed high performing areas in addition to those needing improvement.

Secondly, as part of the council’s preparatory work ahead of five year business planning and a priorities and spending review, Barnet was seeking an independent benchmarking tool to ensure that they focussed on the correct areas of the council during this process. Oliver Jones, Performance Manager at Barnet has taken a lead role in piloting the use of LG Inform within the council for these areas of work and reports that “It’s a great tool and a great development”.

Each quarter the performance management team at Barnet use the LG Inform headline report tool to produce easily accessible benchmarking reports. These provide a general “temperature check” of council performance for the council’s Performance and Contract Management Committee. The council also publish an embedded link to the live LG Inform headline report for Barnet (which is automatically updated by LG Inform as new data becomes available) on the council’s website. Residents and councillors now have easy access to a public and independent tool which gives them a balanced picture of performance and also allows comparison with peer authorities. The Barnet transparency website pages can be viewed here: www.barnet.gov.uk/performance

Figure 1: One of the LG Inform headline reports embedded on the council’s website 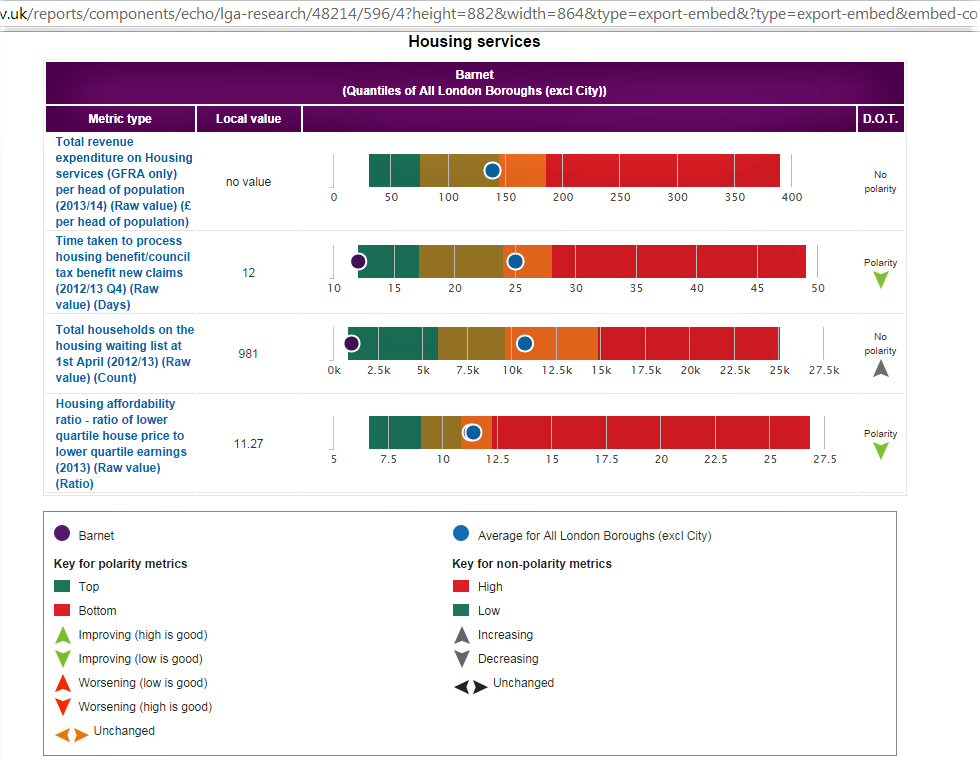 As part of their Medium-Term Financial Strategy, the council embarked on a priorities and spending review looking at services where savings could be made or income increased. LG Inform was used as an independent benchmarking tool to examine performance as well as costs and to ensure a focus on the correct areas of the council during the process. LG Inform headline reports provided information on unit costs and allowed detailed service area information to be viewed. The performance team used LG Inform to provide bespoke packs of reports which provided senior management with evidence to support suggested proposals. The reports allowed senior management to have access to a broader set of information than would normally be made available, therefore, ensuring high quality decision making.

Oliver explains that LG Inform reports allowed the council to “…see where we sit in the spectrum with our peers so for example… if we are low cost but low performance do we need to invest in the service to make it better. It has allowed us to ask questions about service performance and costs outside of our normal monitoring, allowing members and senior officers to assess the whole service”

One advantage of LG Inform is speed. LG Inform has saved the team time and effort that they would otherwise have had to spend gathering information now easily provided by Inform. The tool has given the team at Barnet the ability to create high quality streamlined reports and graphics which can be produced in minimal time. This has allowed the team to respond quickly and easily to regular enquiries from members about how the council is performing against its peers. Oliver highlights;

“It means we can work more effectively as it is so easy to create reports and do keyword searches about performance issues… LG Inform has allowed a small performance team to deliver high quality assistance.”

LG Inform is used by Barnet to benchmark their internal and externally provided services.

Oliver reports that the tool has:

“…improved knowledge and made it easier for councillors and members of the public to see our performance. LG Inform has given us access to a wide breadth of information quickly, allowing the team to easily answer these enquiries more easily”.

The tool has also enabled easy access to a wider range of information. Oliver explains that “it makes benchmarking a lot easier as it allows us to cover a broader set of indicators so we don’t just concentrate on the ones we report.”

Financial modelling of the council’s projected budgets illustrated a £70m budget gap up to 2020. As part of producing the Medium-term Financial Strategy for 2015-20, the council embarked on a priorities and spending review looking at options as to how services could make savings/ increase income.

LG Inform has given the team at Barnet the ability to quickly create high quality streamlined reports and graphics which can be produced in minimal time. It has given the team easy access to data and the ability to visualise and present it in a way that they wouldn’t have otherwise had time to do. This has allowed senior officers and committee members to view timely, accurate information to support them in their decision making.

The embedded LG Inform report link that the council are using on their website also automatically updates every quarter and Oliver explains this has saved time within the team and also provided a sense of robust independence.

Without the automatic update facility he explains “…we’d spend quite a lot of our time picking up data as it was published and updating reports and publishing them to the website and getting colleagues to double check - so having a central team doing that at the LGA doing this automatically - is great.”

Ease of Use and Support

When Oliver had queries, he reports that he received a prompt, helpful and comprehensive response from the LG Inform team.

The performance team at Barnet use LG Inform on a regular basis. Oliver suggests that new users initially invest time to finding out about the features of LG Inform and take full advantage of everything there is to offer. FAQ’s, online guides and attending the free LGA Inform sessions have all proved invaluable in finding out about extra functionality on the system.

The ease of using the search function in LG Inform has allowed officers from all over the council to intuitively use LG Inform to benchmark performance, and the performance management team at Barnet encourage colleagues in other parts of the organisation to benefit from using Inform.

“We recommend using LG Inform to other parts of the council ….the ability to create reports quickly and the search function means you don’t have to be a specialist to use it.

The council are now starting to experiment with LGInform Plus to extend their reach into lower levels of detail such as wards and Super Output Areas.

LG Inform can be accessed at the following address: https://lginform.local.gov.uk/

For more information on how LG Inform is being used in Barnet please contact Oliver Jones, Performance Manager: Oliver.Jones@Barnet.gov.uk

Other articles in this section